Welcome to the Nebraska Star Party!  This section should give you an idea of what to expect and help with your planning.  Feel free to call the NSP Hotline number for more information or to answer specific questions.

You can expect exceptionally dark skies at the Nebraska Star Party.  This is a remote and very sparsely populated area having no more than handful of lights within miles of the viewing area.  The nearest town (Valentine, population 3000) is 27 miles to the northeast. Mullen, population 200, is 50 miles to the south.  The 3,100 foot altitude, and the fact that the Sandhills are a dry, sandy, upland plateau, help keep the haze low and the transparency high.

Reactions to NSP have been very favorable.  Many people have commented that the NSP’s skies are on par with Fort Davis’ and the Texas Star Party.  Veteran observers were astounded by the brightness of the Summer Milky Way, by seeing many Messier objects with the unaided eye, and by watching faint stars rise on the horizon.  For some, the grandest impression was just looking at the central bulge of the Milky Way.  It’s impossible to view without realizing that you’re seeing a spiral galaxy at close range – an impression that is not achievable from suburban, and even most rural, dark sites. 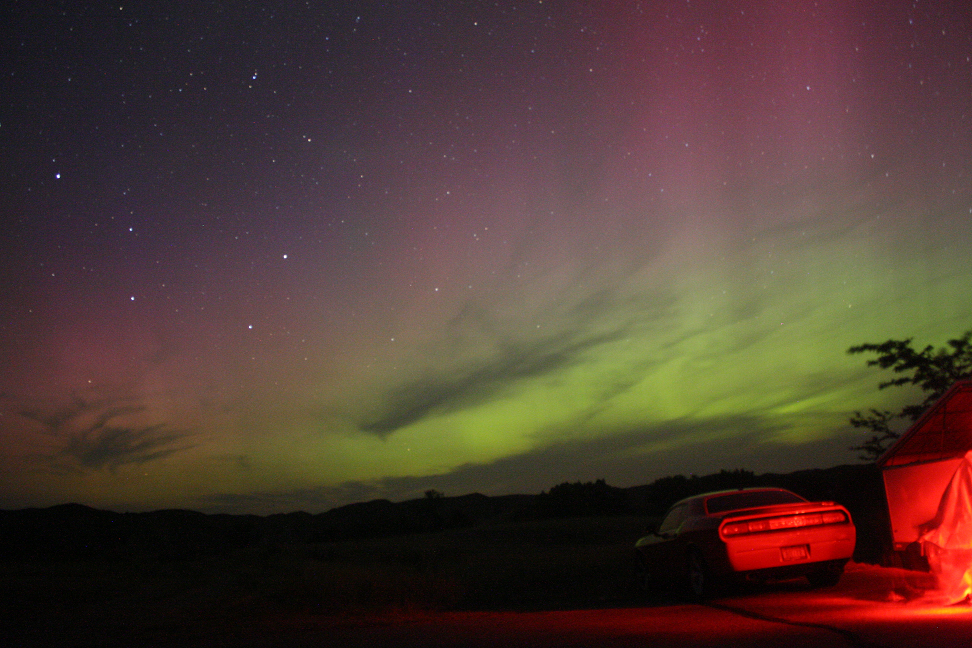 Amenities
Star party observations are held among the gently rolling grassy hillocks along the southern shore of Merritt Reservoir, on lands maintained by the Nebraska State Game &amp; Parks Commission.  Only primitive camping is available at the observing site.  Merritt Trading Post, about 10 minutes’ drive north of the observing field on Highway 97, has groceries and a wide range of necessities for the sportsman and camper, in addition to public showers and coin operated public laundry facilities.  In addition, electric hookups and coin operated shower facilities are available at the Cedar Bay Campgrpound on the east side of the lake along Highway 97.

The city of Valentine, seat of Cherry County, is approximately 35 miles north of the observing field on Highway 97.  This will afford attendees access to grocery stores, shopping, and free Wi-Fi access to the city’s network at many locations throughout the town.

NOTE: Although the observing area happens to be officially located a few hundred yards inside the Mountain Time zone, the city of Valentine, Merritt Resort, and most other commonly accessed locations in the area are within the Central Time Zone.  Therefore, for convenience, all Event Times at NSP are reckoned in Central Daylight Time. 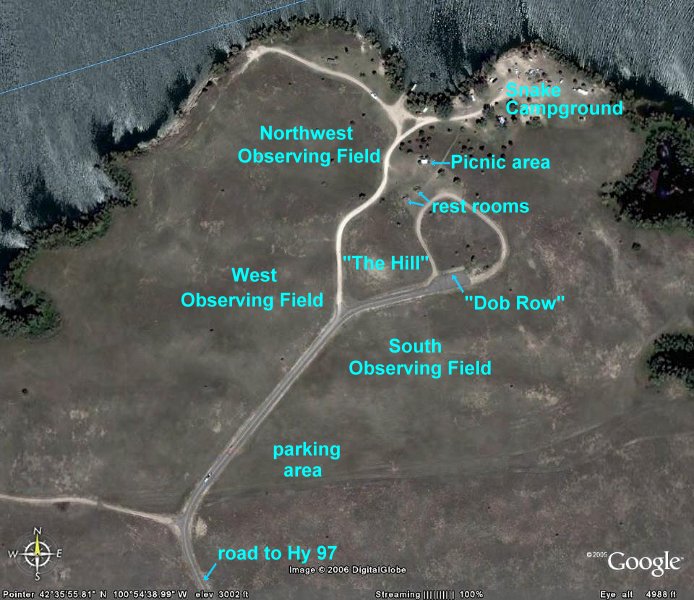 Valentine’s weather is typical of the North Central Great Plains. General summer conditions are hot and dry with a potential for sudden changes.  Thunderstorms are always possible, and can be quite severe, bringing with them high winds along the face of the front.  Temperature extremes can range from the 100s in the afternoon to evening lows in the 50s, however typical late July and early August temperatures reach an afternoon high in the 90s with nighttime lows in the 60s.  Remember that 60 degrees can feel pretty cold after a hot afternoon, particularly for a calm activity like observing, so cool weather dress is usually required.  The quickly dropping temperatures can often cause dew as well.

Best Routes to NSP  Click here for a detailed map

FROM THE WEST OR EAST ON I-80: Get off I-80 via Exit 177 at North Platte, then go north on Nebraska Hwy 97 through Tryon and Mullen to the Reservoir (115 miles total distance).  To go directly to Valentine, take the same Exit 177 at North Platte, and then take US 83 north through Stapelton and Thedford directly to Valentine (131 miles).  The US 83 route has a higher speed limit and a somewhat better road surface, but the Hwy 97 route is somewhat more scenic, and will take you directly to Merritt Reservoir and the Snake Campground.  Both routes take you through the heart of the picturesque Nebraska Sandhill country, so have your camera ready!  One word of caution: there are very few towns along these two routes, so make sure your gas tank is full when you leave North Platte.  Also, while some maps show other roads in the area, most are not good black top, and should be avoided (the Brownlee Road in particular – literally only one lane wide – is not suitable for large RVs).

ALTERNATE ROUTE FROM THE EAST ON I-80: Get off I-80 at Exit 312, and go north on US 281 into Grand Island to Hwy 2.  Take Hwy 2 west through Broken Bow, Thedford, and on to Mullen.  At Mullen, turn north onto Nebraska Hwy 97, which takes you directly to Merritt Reservoir.  You save about 27 miles by going this route, verses staying on I-80, but you go through a number of small towns and the speed limit is lower.  This route does take you past the Nebraska National Forest west of Halsey, which is an interesting stop for nature buffs and families.  If you wish to go directly to Valentine rather than Merritt Reservoir, get off of Hwy 2 just east of Thedford and take US 83 north to Valentine.

FROM THE NORTHEAST OR NORTHWEST ON I-90: Take exit 192 at Murdo South Dakota, then go south on US 83 through White River, Mission, and on to Valentine (76 miles).  From Valentine, take Nebraska Hwy 97 southwest to Merritt (total distance: 102 miles).

For detailed driving directions in and around Merritt Resort see our How To Get There page.

The Nebraska Sandhills are a geologically unique feature.  They consist primarily of ancient sand dunes now covered by a thin layer of soil and grass.  The dunes are readily apparent and can be surprisingly tall.  The Sandhills feed the Ogalala aquafier which stretches from South Dakota to Texas and, under artesian pressure, supplies the numerous lakes dotting the area, as well as the Niobrara and Snake Rivers.  The Snake River was dammed to create Merritt Reservoir.  The primary industries are beef and buffalo ranching, recreation and tourism, and (now) astronomy.